After Tony's fundraiser was successful, Indiegogo suspended his campaign and refunded all of the donations without any explanation.

This is such an upsetting turn of events but alas, Tony is still trying to re-fundraise the same amount so he can stay true to the promise he had made to his students. You can donate to and share his fundraiser on Facebook here.

This week I caught up with Tony Hamoui aka Hamstank, a Boston based music producer, engineer, and youth educator. With the onset of Covid-19, community centers closed their doors leaving many students without access to creative programming and resources. Hamstank saw the negative impact that this had on his students so he launched an Indiegogo campaign with a fundraising goal of $2000 to equip teens with the means to remotely create music and to continue exploring the wonders of music production. As all of our lives have taken an extreme digital shift, I wanted to learn more about Hamstank’s background as an educator and find out how we all can support his students!

How are you doing? How are you staying inspired during these weird times? Have you learned any new skills?

I’m doing pretty well. Time is weird, life is weird. I’m staying inspired the same ways I've found inspiration before: being bored and then consuming a ton of media which refills “my well” of creativity/inspiration. My creative process always includes a period of intake when I refill “the well” with a lot of media; books, video games, music, shows - then I fall into a phase of creation after that when i’m not consuming anything. These days the intake period is a lot longer than previous times.

The boredom has been real so I’ve tried a bunch of random things. I just wrote a song using things at arms reach, I took a coding class, I built a harp, I got certification in some new music software - I am just trying to learn as much as I can.

You are clearly very passionate about music and music technology. How did you learn about these fields?

I’ve been into music for as long as I can remember, since I was a wee lad. I was in a bunch of bands in high school and college but over time band members were getting flakey or were dropping out and I was like dang...”I just want to do this by myself” which led me to realize that I could do this by myself.

From there I started making music out of Garageband but I wanted to do more and more things that I couldn't in that software which led me to learn Logic and from there I just took off. I ended up seeking out the Logic textbook and things just sort of spiraled out of control from there and, years later, here I am still reading those textbooks.

So it sounds like a lot of self-guided learning.

Yeah, I actually learned the word for that: autodidactic. It’s one of my favorite words because it sounds like a dinosaur species. Honestly, it was a big breakthrough and the biggest thing that I took away from higher education was learning how to learn. And once I learned how to learn it was a light switch that flipped in my head and the rest of it just came to me. 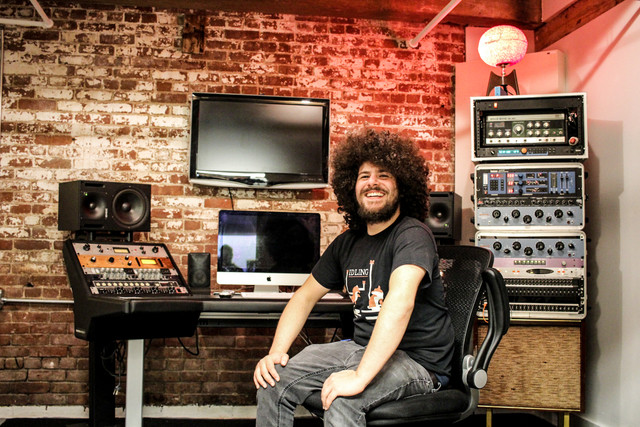 Can you talk to me a little bit about your teaching background?

I’ve always been drawn to teaching. Even as a second grade kid I’d make little packets to give my younger cousins to teach them things and through my education, I tutored classmates and was a TA in College. I just really liked helping other people learn so this was very subconscious. I never fully thought about it and never was like “I'm going to become a teacher someday”.

But when I fell into music, I kept coming across teens at different organizations and institutions, like The Sound Lab in Brockton, where they didn’t really know how to use the software or how to make music and record themselves. It started out small, I'd be like let me show you some cool tips and they were super appreciative and were like “woah you can do that?”.

"After sharing a few tips with them, I accidentally made a curriculum of all the things that I wish someone had taught me when I was early on in my music journey."

They were building a workflow that was enabling them to use the software effectively and it was empowering them to use this software to express themselves. So from there I kept thinking about how I could streamline this learning process to empower them even further. I guess I was more-so teaching them how to learn.

It's really cool that a passion unfolded in front of you while also seeing a gap in the music scene and youth development space.

Yeah, from there I started working with youth in the ICA where I ran a series of music workshops, and pre-Covid-19 I had a program at the Boston Public Library and I'd run workshops there and had weekly music production classes.

So what inspired you to launch this fundraising campaign?

Honestly, I was just thinking about these teens who had these doors closed on them. When those doors closed in March, sure, I was out of a job but more importantly these teens were out of a safe space where they can build community and create art - they were heartbroken.

Since those doors closed at the BPL, I was getting emails from my students who were saying how hungry they were to make music. They’d be like, “Hey Ham, I have a whole notebook full”. I was just like dang, I wish I could do something more right now to help them.

I applied for some grants on their behalf and I didn't hear back so I decided to take matters into my own hands. During the early morning hours of a sleepless night on May 8th, it just hit me - I thought why not reach out to my network and tap into the generosity of human beings to help out, instead of just waiting around for some faceless institution to deem these kids worthy of getting the resources they need to create, so I launched the Indiegogo campaign.

Creatives are all being impacted by this global pandemic in a variety of ways. How are teens uniquely impacted?

As an adult in the creative scene, you have way more freedom to do whatever even amidst the intense restrictions we are all living under. There is no age limit to being creative, but there are age limits to getting access to certain resources, spaces, and tools.

“I feel that teens, particularly teens from low-income families, are even more affected by the quarantine when it comes to creating art.”

My students relied on accessing community spaces for the internet, for computers, and in this specific case music software, which isn’t super accessible in order to be creative and express themselves through music.

This project aims to equip teens with the means to remotely create music and to continue exploring the wonders of music production from the comfort of their home. For roughly $400 per teen, we can equip each person with a computer, MIDI keyboard, and cover the shipping costs of the materials.

Since launching this campaign, people from all over have been supporting you which is great and you are so close to hitting your goal! So once you get these learning materials to your students, what comes next?

Well this Indiegogo campaign is just Phase 1 of “The Master Plan”, which is the name of the email thread I have going with my students. This phase will give them the tools and resources they need to continue to experiment creatively. Once they have the appropriate materials at home then we are able to enter Phase 2, which is to keep building their skill sets through online classes and workshops together. From there, we enter Phase 3 which is having them create a serious body of work that showcases the talent of these up and coming artists.

It sounds like you sound like some really exciting creatives that are definitely in need to help them bring their skills to the next level! I am excited to hear the final product!

What are some other ways that people can support your efforts?

Donate! We are so close to the $2000 goal with 4 days left on the campaign! Any amount really does make a difference and I super appreciate everyone who has contributed so far. You are making a huge difference in the lives of these students.

If donating is not an option, then please spread the word and share your network. Also, if you have any sort of computer peripherals (mouse, keyboard, etc.) or any gear such as midi keyboards, monitors, or speakers, or anything - that goes a long way. The teens don’t have anything to create music right now so anything like that would seriously help.

So Hamstank, what is your biggest dream for the future?

My biggest dream is that out of this whole strange thing that is happening to us right now, we see an explosion in the creative arts.

"I know that is me being optimistic, but I feel like there's a Renaissance on the horizon.”

You can follow Hamstank here and contribute to his Indiegogo campaign here!