This is the first in a two part storyteller series as part of the New Narratives: Reclaiming Asian Identity Through Story through Unbound Visual Arts. The series was curated by Leslie Anne Condon in partnership with the Asian American Resource Workshop. New Narratives and can be viewed in its entirety at unboundvisualarts.org. Enjoy!

taught me to cook dumplings

to place each wrapper on parchment,

i never saw her negotiate the folds

of each wrapper, dampening the edges

on the tip of my tongue

as i imagined a woman who needed

me until she didn’t

who clutched, then let go

a woman who never taught me

to leave everything you love

there are many names for hunger

and my body knows them all

a nation lives within me, split open

i never saw my mother

hunched over the stove, stirring,

even as the dumplings drifted away,

longing to hold them in her hands

and know their warmth

This wonderful 40-page zine can be found in its entirety here.

Mookie - Whose Lives Matter? A Spoken Word to Sister America 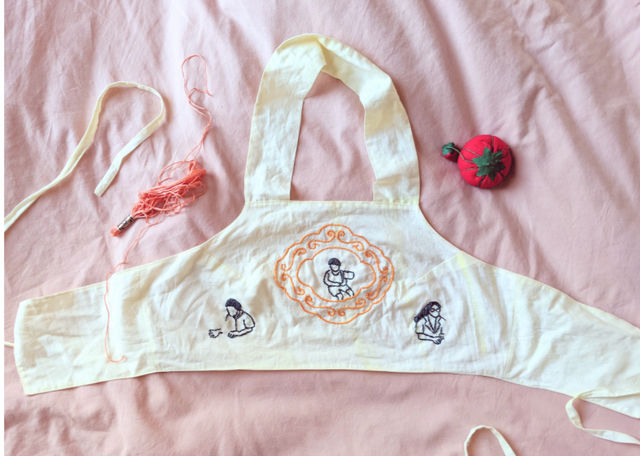 many migrations (work in progress), 2020

in the early days of

could earn you more—

a young woman can wear

while falling in love

my parents came to america

my mother wove capacitors and diodes into green schematics

so that electricity speaks to itself

in the palm of your hand

and pork feet at the super 88

i learned to sew,

after four years of family-paid

a childhood memory so foreign to me

i am a tourist within it >

i only know how swiftly

a force to be reckoned with

a magnet for trust-fund whites and

the ways some people are artists

needle taught me how two sides holding together with tension

can almost create the shape of a story >

no one is surprised to see

are also the adopted daughter

of a manhattan shopkeeper

placing her hand on my shoulder—

a touch that feels familiar >

extra bag is free, she insists

we are kin now, and in chinese

are the same sound >

that aren't one's own

Michael A. Rosegrant - Faces Like My Friends Were All Over the Food I Ate

A black and white photo of a little girl with chubby cheeks in a quilted winter jacket, a frown in the forehead, a lower pouting lip, in the arms of Grandpa wearing a Mao suit and a stern stare. Behind them, the brick columns of a balcony, a cloudy sky. Below them, the chanting of the people “Long Live Chairman Mao! Long Live Chairman Mao!”

A sea of gray uniforms, arms brandishing the Red Book, the marching pounding the ground. The smell of gasoline, the smoke that made her cough and stung her eyes, and her mother, shuffling between the bedroom and the furnace, carrying papers and books to throw into the flames. The flames licking the worn copy of Tales of the Monkey King, her mother’s teary face, Grandma in a corner of the room, trembling in the dark.

Hundreds of sparrows in the sky, a raven cawing in the distance. Her mother gripping her shoulders at the procession, the sudden cold and moist palm of her mother on her eyelids, the angry mob, the collective gasp as the first piece of garbage was hurled, the smell of rotten eggs at their feet, the Red Guards shouting “Death to the Bourgeois!”

The empty seat at the dinner table, Grandma and her mother voices stumbling in unison over the carefully crafted characters of the father’s letter from America, bowls of noodles untouched. She, in the red quilted jacket, holding her breath. A concerted sigh of relief as the mother repeated the lines of the visa approval over and over again, as if hope was impossible to bear in silence.

Grandpa on his bicycle, sliding down the cobblestone street on Nanjing road, right up to the front door where she was waiting for him, the chewy candy wrapped in a rice paper he would pull out from the right breast pocket of his gray jacket, the melting of the rice paper on her tongue, the laughter of Grandpa, the sweetness of the milk candy on her tongue, a moment lost in the chaos of time.

August 14th there will be a Storyteller Roundtable Discussion including short readings by a few storytellers and an in-depth discussion with Q&A facilitated by the Asian American Resource Workshop.

Stay tuned for part two of this series tomorrow and be sure to check out the entire series here!